Koshiki Karatedo is a competition system that allows participants to understand the principles of a fighting match, combine safety with full power techniques and immerse in the true spirit of traditional Budo. Practicing Koshiki Karatedo develops mental strength, physical fitness and coordination, and martial prowess through efficient training of hand and foot techniques and body movement.

By using “Super Safe” protective equipment, we can train without fear of injury and still execute full power punching (tsuki), kicking (keri), striking (uchi), and other hitting (ate) techniques. This allows one to truly get a sense of the techniques, an essential part of grasping the practical and healthful aspects of traditional Budo. 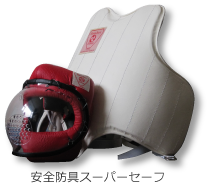 True Karatedo is a systematic fighting method using bare hands and feet, consisting of basic ways of punching, blocking and kicking. Based on this principle, Koshiki Karatedo does not use gloves or foot protectors, such as boxing gloves or foot shields. Instead, we strike with one’s bare hands and feet, and use “Super Safe” body and face protectors to protect the parts of the body and face that cannot be trained to withstand injury. In addition to being protected by the Super Safe protective equipment, contestants are protected by Koshiki Karatedo safety rules and official referees who intervene as necessary to help prevent injury. This kind of direct contact allowed in Koshiki Karatedo is the most fundamental element of Karate.

An “Accumulation of Points” Competition System

Koshiki Karatedo is an “accumulation-of-points” based competition system that awards points for offensive, combination and counter techniques executed by both contestants. Conventional non-contact Karate, for example, is a demerit mark system which stops punches and kicks without actual contact, then judges a match based on the technical execution of the first successful attack. Actual contact results in a loss of points by the offending contestant. Non-contact Karate does not award points for mutual simultaneous attacks, combination techniques or counter techniques, all of which are critical elements of true combat.

Although Koshiki Karatedo is a points-based system, a competitor can immediately achieve victory through the execution of an “Ippon”-full point technique. If a contestant scores an “Ippon”, the match is immediately declared over and the contestant is awarded victory. An “Ippon” technique is a technique or combination judged by the referees to be perfectly and powerfully executed, which without the safety equipment would likely have ended the match with the incapacitation of the opponent. Competitors therefore cultivate Bushido spirit by developing their techniques to the highest level, with the goal of achieving a victory through “Ippon” – a full point technique. This rule ensures that the true principles of karatedo as a martial art remain an essential part of the competition system of Koshiki Karatedo.

Fair and Transparent Refereeing and Scoring

Koshiki Karatedo matches can be easily and fairly judged because the attacking techniques can be clearly seen and heard. Contestants, referees, and audiences can recognize the results of matches not only through their eyes, but also through their ears. A cleanly executed technique makes an easily determinable sound when it makes contact with the Super Safe protective equipment, which can be heard by the referees and audience.

Any style of martial arts can safely compete under fair conditions using Koshiki Karatedo rules. Participants from many styles, such as non-contact Karate, full and semi-contact Karate, Kung Fu, Kempo, Taekwondo and others can compete with each other. Koshiki Karatedo is a truly martial arts competition system allowing all styles to test their techniques in a friendly yet competitive atmosphere.