Prevention effect of face and body risk by “Super Safe”

We protect the vital points of the body that can not be trained by using a “Super Safe”.

Safety protection We wear “Super Safe” on the face and the torso to prevent danger so as not to get injured. 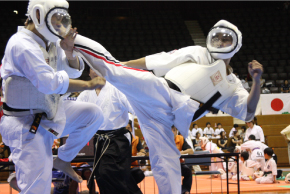 While hitting the opponent with the fists, “safety game”, dynamic and versatile techniques became available

With conventional non-contact rules, full contact rules there are many Karatedo techniques that are forbidden to be “dangerous”.

With the rules of Koshiki Karatedo, many techniques can be revived and used, due to wearing “Super Safe”.

Dynamic and diverse foot attacks, open hand attacks such as hand swords, back swords, hammers against the upper point (face).
For the middle point (body), a powerful approach technique such as “Enpi” (elbow striking) and knee kicking.

Also, against the low point it is also possible to kick legs (low kicks) as a trick skill (making technique) under the principle of “getting the next superior technique by breaking the partner’s body balance”.

If you can produce these infinitely Karate techniques you will further deepen the real pleasure of Karate and compete with the original skills of Karate.

Safety of athletes and development of karate technology

While considering the safety of the athletes, “Necessary for highly safe armor” in order to spread and develop as international martial arts and sports.

With “highly safe armor”, it is possible to measure technology improvement while respecting the spirit of traditional martial arts.

Karatedo games can be roughly divided into three styles.

Currently, the majority of Japanese Karatedo games are played in non-contact.

In the case of non-contact, there are many cases where we do not use armor because of the premise of “do not hit”, and if we can not stop the skill by successfully killing momentum, we will injure.

Because distance is not matched, it is difficult to make judgment depending on the angle and it is easy to invite false judgment.

Also, stopping the skill will cause a momentary skill’s death to die.
Originally Karatedo’s technique is established by “batting with bare hands and kicking with bare feet”.
With non-contact, the real thrill of traditional karate is compromised.

In order to compete fully the skills and pleasure of Karatedo, you can enjoy the game with the light contact or the full contact form, the game form is extremely natural that you can train your opponent with skill.

Development and use of safety armor